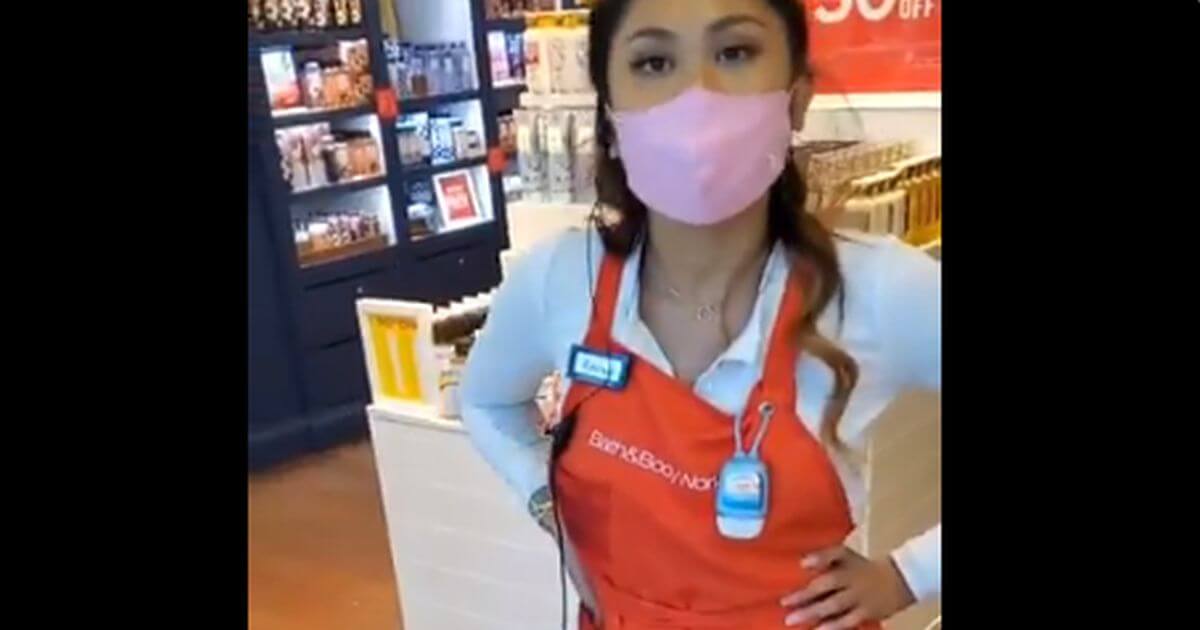 Jeremiah Cota was taking a break from the desert heat and enjoying time with family when he suddenly heard “F— Donald Trump” yelled at him as they walked through a popular upscale mall in Arizona.

Cota, the director of strategic initiatives for the Republican Party’s Trump Victory Committee campaign in Arizona, was wearing a Make America Great Again face mask when the incident happened in front of the Bath & Body Works at the Scottsdale Fashion Square.

Cota, accompanied by his cousin and her little daughter, saw that the expletive had been fired off by an employee standing near the store entrance.

Trump Victory spokesperson Keith Schipper told The Western Journal that Cota needed to take a second to process what he thought he had just heard and then decided to inform the store’s manager.

He proceeded into the Bath & Body Works and asked the woman who had just yelled ‘F— Donald Trump’ at him for her store’s manager. She told him she was the manager.

Cota recorded the encounter on his phone.

I was accosted by @bathbodyworks manager simply for wearing a Trump face mask. She yelled at me “F—- Donald Trump” while I was simply walking by the store.

I went to ask if I misheard her and she said no.

“Yeah, because that’s how I feel,” she confirmed.

As of the time of publication, the video had been viewed approximately 1 million times.

“We’d like the opportunity to speak with you about your experience, Jeremiah. Please DM us your phone number and best time to contact you. Thank you!” was one.

We’d like the opportunity to speak with you about your experience, Jeremiah. Please DM us your phone number and best time to contact you. Thank you!

“We assure you we [are] taking this seriously and partnering with the appropriate team for further review,” the chain added in response to another Twitter user.

We assure you we taking this seriously and partnering with the appropriate team for further review.

The Western Journal reached out to Bath & Body Works and received a response via email stating the employee in question no longer works with the company.

“We absolutely do not condone these actions, as all customers should be treated with respect,” the statement from a spokesperson read.

“We are working to connect with the customer to share our deepest apologies for his experience. The associate in the video is no longer employed by the company.”

Schipper described the incident as sadly another example of intolerance from those opposed to Trump.

“People should be able to go to the mall with their family and enjoy some time and not have to worry whether they’re going to be yelled at for who they support for president,” he said.

Schipper noted it was not the first time Trump supporters in Arizona have experienced unacceptable behavior directed toward them.

He pointed to a far more serious example in late May in Bullhead City, when an object, thought at first to be a bullet, shattered a window at the Mojave County Republican Office, while six people hosting an online MAGA Meet Up were inside.

Fox News reported that local police did not believe it was a bullet, but an RNC official said witnesses, some of whom were military veterans, described the impact as “extremely loud and quick” and said it “seemed like a gunshot, based on their experience with weaponry.”

It was a “scary situation” for the volunteers in the building at the time, the official said.