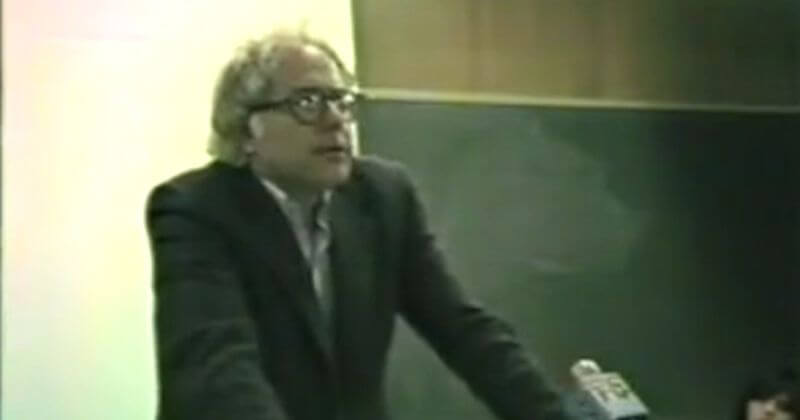 Watch as Bernie Sanders claims that President John F. Kennedy’s opposition to the regime of Fidel Castro in Cuba made him want to puke, in this flashback video from 1986.

Now THAT is the real Bernie and every voter needs to see this flashback video.

Here’s the transcript, it really says a lot about Bernie, who really has not changed:

“But I remember, for some reason, being very excited when Fidel Castro made the revolution in Cuba. I was a kid and I remember reading that. And it was just, it seemed right and appropriate the poor people were rising up against rather ugly rich people.

And I remember, again, very distinctly, a very distinct feeling. I was watching the debate, you remember the famous Nixon-Kennedy debate, that was the first time that presidential candidates actually debated. And I was becoming increasingly interested in politics, didn’t know much, but was interested.

I remember sitting in the student lounge in a dormitory watching the debate, and at that time — well, I can’t talk about you, but I was very excited and impressed by the Cuban Revolution.

And there was Kennedy and Nixon talking about which particular method they should use about destroying the revolution. Remember, the irony, as we learned the history later on, Kennedy was saying that Nixon was too soft on communism, to pick up a point that Rick was making, in Cuba.

We should deal firmly with Fidel Castro and Nixon was playing the role of hey, you’ve got to be patient. You know, you can’t do these things, you got to negotiate. When of course, what he was upset about is that secretly they were planning the Bay of Pigs invasion right then.

But for security reasons, he couldn’t come out and say we’re already planning the destruction of the Cuban Revolution, don’t worry about it. So he — he was the liberal and Kennedy was playing the conservative.

Actually, when you read novels, people say there’s a sick feeling in your stomach. Usually I’m sufficiently unemotional not to be sick, but I actually got up in the room and almost left to puke.

Because for the first time in my adult life what I was seeing is that Democrats and Republicans, both of them, as of course, as Rick points out, Kennedy was the flashing young liberal and what we were seeing right before our eyes — my eyes way, way back then — and I didn’t know anything about politics, but clearly that there really wasn’t a whole lot of difference between the two.”