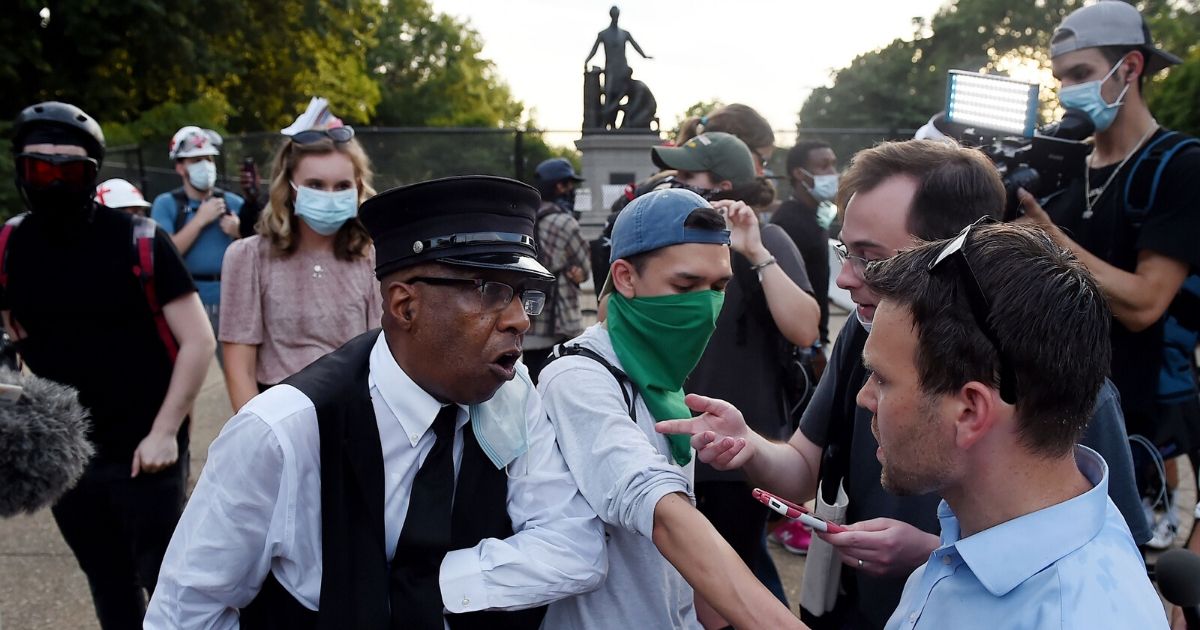 This summer of Marxist-inspired riots has created iconic images of Americans fighting back against the mob and speaking up for our nation’s history and heritage.

Those images have included everything from Catholics in St. Louis fighting to save a statue of that city’s namesake to the professional soccer player who stood alone during the national anthem while her team knelt.

Add to that list of heroes last week’s defenders of the Emancipation Memorial in Washington, D.C.

Located in Lincoln Park on Capitol Hill, the Emancipation Memorial (sometimes referred to as the Freedman’s Memorial) is a statue of President Abraham Lincoln holding the Emancipation Proclamation in his right hand while his left hand hovers over the head of a liberated slave.

Radical left-wing activists claim that the statue looks as though the slave is kneeling before Lincoln, but as statue defender Marcia Cole, a member of the African American Civil War Museum’s Female RE-Enactors of Distinction, explained in a viral video: “That man is not kneeling on two knees with his head bowed. He is in the act of getting up.”

“That man is not kneeling on two knees with his head bowed. He is in the act of getting up.”

Listen to this beautiful soul.pic.twitter.com/jfOoO8PfWS

Cole is dressed in the video as Charlotte Scott, the former slave who made the very first donation to fund the statue in the 19th century, The Wall Street Journal reported. In fact, almost the entire memorial was funded by freed slaves; the only part not financed by freedmen and women was the government-gifted pedestal.

During the protests, young activists shouted at older black men and women who were defending the memorial. But Don Folden, an African-American tour guide in D.C., gave those activists a history lesson.

This man just walked in with his own megaphone:
“Y’all don’t even know the history of this statue, but you want to tear it down!” pic.twitter.com/RJv1VpwXrh

At one point, a young woman jumped up and down and hysterically shrieked at Folden over and over again: “Why are you protecting it?”

“We gonna get it, one way or another,” she said.

Warning: The following video contains vulgar language that some viewers may find offensive:

“Why are you protecting it?!”

BLM activist gets into a verbal exchange with an older black guy who was speaking up against tearing the statue down.#emancipationstatue pic.twitter.com/4crUOJhDFP

Folden simply repeated one question over and over again: “Who paid for it?”

Do you think the Emancipation Memorial should be removed?

D.C. resident Nathan M. Richardson, dressed as Frederick Douglass — who spoke at the statue’s dedication in 1876 — stood next to Folden and also tried to reason with the screaming leftist.

Richardson later told the Media Research Center he was there because “we need a historical reference so that we can move forward in the conversation.”

The Friday protest calling for the statue’s removal was organized by The Freedom Neighborhood, a group led by Harvard University student Glenn Foster, who told the Washington Examiner his group agrees with the principles of Black Lives Matter movement, though is not officially affiliated with them.

“We’re going to tear that motherf—er down!” he shouted during Friday’s protest.

Foster once made a YouTube video called “How I Got Into Harvard,” in which he talked about gaming the system because his ACT scores were less than perfect.

So, a young man who received benefits that an older generation of black Americans did not has vulgarly called for the removal of a memorial that his elders rightfully honor. His attitude tells you everything you need to know about our contemporary educational system and the state of America’s “elite” universities.

People should not be asking how to get into Harvard. They should be asking why anyone would want to go to Harvard.

“And the reason I say they are full of s— is because their money ain’t saying Black Lives Matter. You coming out here, you want to tear down statues, but how much of this black history of D.C. do you really know?”

Eleanor Holmes Norton, the District of Columbia’s nonvoting delegate to the House of Representatives, has announced she will introduce legislation to remove the statue.

The designers of the Emancipation Statue in Lincoln Park in DC didn’t take into account the views of African Americans. It shows. Blacks too fought to end enslavement. That’s why I’m introducing a bill to move this statue to a museum. pic.twitter.com/A0MOnISH1N

She is a Democrat and, just like other Democratic politicians right now, is catering to the mob and going all-in on their “cancel culture” demands.

The statue represents the long struggle for freedom for all in the United States.

An older generation of black men and women were taught to appreciate historical figures like Abraham Lincoln, flaws and all.

Yet activists today have already torn down a statue of Ulysses S. Grant, the Union general who military brilliance helped liberate slaves in the Confederacy.

A younger generation is clearly being taught raw hatred for the United States.

Folden, Richardson and Cole acted in a bold, educated and fearless manner last week. And they did not need a pretentious Harvard pedigree to do so.