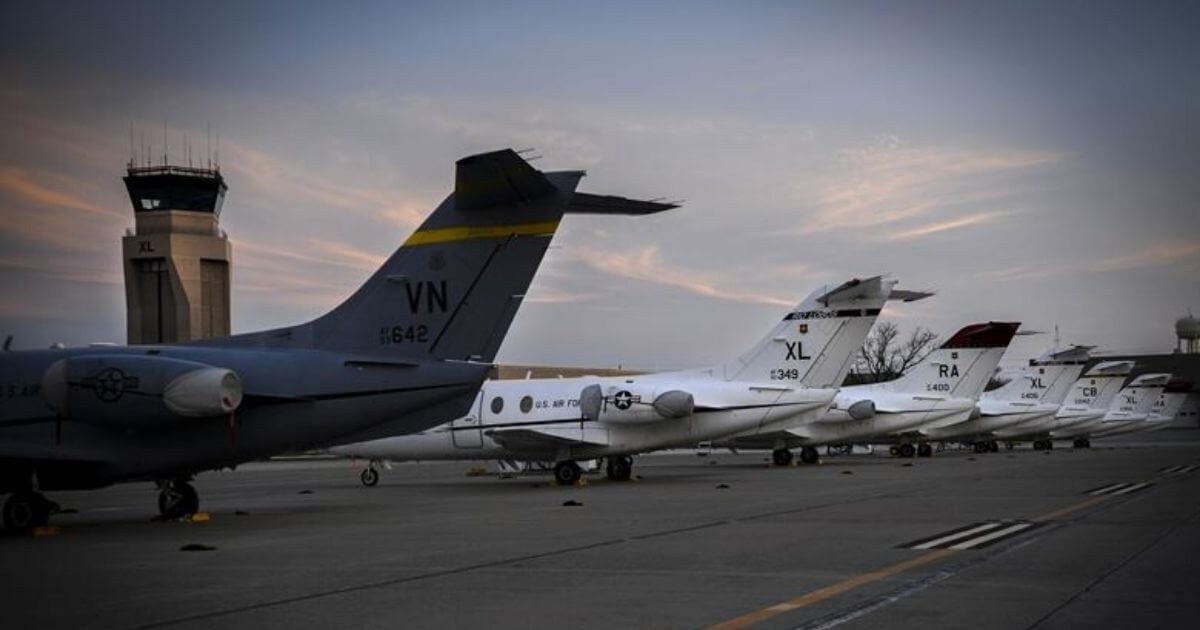 A China-based company’s proposal to build a wind farm a few dozen miles away from Laughlin Air Force Base in Texas is raising red flags about national security concerns and potential espionage.

The Blue Hills Wind development project, located not far from America’s border with Mexico, is being proposed by GH America Energy, a subsidiary of Guanghui Energy Company, which is owned by a former Chinese army officer, according to Foreign Policy.

The federal government has so far not blocked the project, which is currently undergoing a review to ensure that wind turbines do not impact pilot training at the base.

However, voices are being raised in concern.

“Why this location and why this project?” Republican Rep. Will Hurd of Texas, a former CIA officer whose district includes the project, told Foreign Policy.

“Why are we allowing a Chinese company to do that in the U.S.? A former U.S. general would not be able to do this kind of project in China.”

“It triggered alarms the first time that we got evidence of Chinese money,” he said. “If the electricity stops or the water stops flowing, those bases stop operating.”

Local officials, meanwhile, have shared their concerns with the Trump administration.

“Our greatest concern is the long-term implications this will have on the Air Force’s mission of pilot training not with a single application, but rather a cumulative strategy that cannot be evaluated in the first filing,” County Judge Lewis G. Owens Jr. and Del Rio Mayor Bruno Lozano wrote in February to Treasury Secretary Steve Mnuchin.

“We believe that this project and all future projects of a similar nature will result in unacceptable risk to national security of the United States.”

Republican Sen. Ted Cruz of Texas also has issues with the project.

‘“Sen. Cruz is particularly concerned by the threat of a Chinese-owned company erecting wind farms near Laughlin. China has demonstrated a willingness to invest billions of dollars in specific, targeted economic initiatives through private companies to expand the global reach of their security and espionage capabilities,” a Cruz spokesperson told Foreign Policy.

“Not only will these wind farms near Laughlin affect training routes, they could also risk our national security.”

But in Texas, the rules are on the side of development, one expert said.

“On the state and federal level there are no regulations regarding the development of these wind farms,” Jack Hession, a senior vice president at Madison Government Affairs, a lobbying group that is supporting community opposition to the project, told Foreign Policy. “There’s no way to deny it as it was purchased. The proposal to do a wind farm was a viable option for the owner.”

Local officials started paying attention to the issue in early 2018, “after Guanghui purchased properties including nine ranches under the name of Brazos Highland Properties LP, environmentalists say, a holding company controlled by the firm,” according to Foreign Policy.

“The company proposed building 50 to 130 wind turbines that could reach up to 700 feet above ground level, according to estimates that local officials provided to the Trump administration.”

“We don’t want to have that same concern when it comes to our grid, right?” Hurd said. “So should another foreign-owned entity be able to put power on the grid which means they’re controlling some of that power right now? I think the answer is no.”

The potential for mischief worries Hurd.

“Would they be able to manipulate the industrial control systems on their side? Obviously, because they would they would own that,” he said. “Is there a way that by being connected to [the] electrical grid, that you would be able to overload that grid?”

Asked if he feared a foreign company could trigger a statewide power outage, Hurd replied: “100 percent.”

One commentator said it is never clear with Chinese firms if they are businesses or arms of the government.

“This gets to a larger debate about China’s economic system itself, about the division between the state and private sector,” Ashley Feng of the Center for a New American Security told Foreign Policy. “Are Chinese private firms that are going abroad and acquiring technology and companies and land, are they actually acting independently from the state? That’s a blurred line.”

Kwast, however, made it clear he believes that everything China does flows from a common strategy.

“This is an economic war,” he said.

“China is looking to invest in anything that can give them a competitive advantage on anything. They want to win this economic war without firing a shot.”