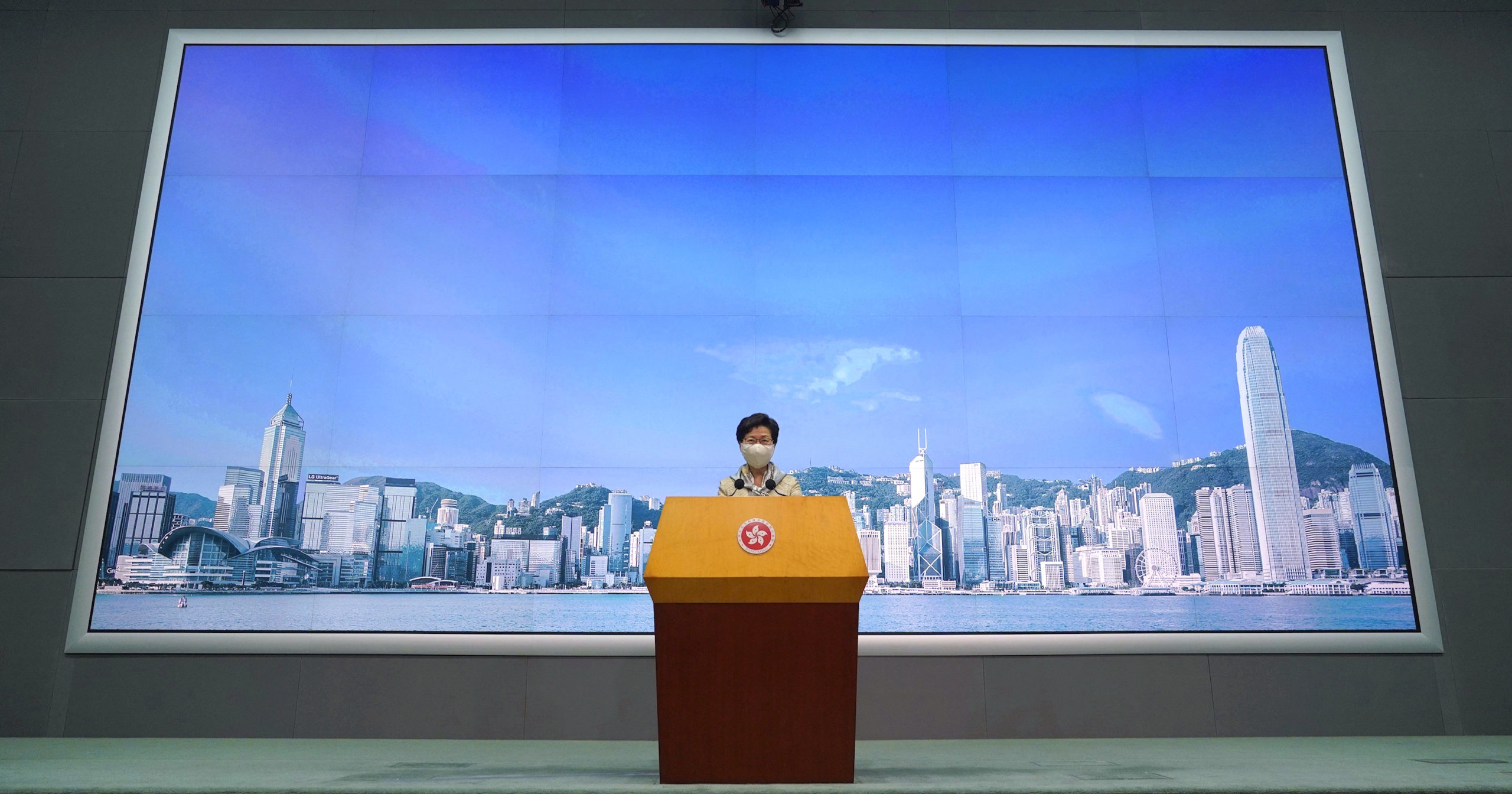 China on Tuesday approved a contentious national security law for Hong Kong that takes direct aim at the actions of anti-government protesters last year, in a move many see as Beijing’s boldest yet to erase the legal firewall between the semi-autonomous territory and the mainland’s authoritarian Communist Party.

Details of the law remained under wraps until 11 p.m. (11:00 a.m. ET), when it was published and took effect immediately.

The text specifies that any person taking part in secessionist activities, whether organizing or participating, would violate the law regardless of whether violence is used.

Those who destroy government facilities and utilities would be considered subversive. Damaging public transportation facilities and arson would constitute acts of terrorism.

The law took effect an hour before July 1, the 23rd anniversary of the territory’s passing from Britain to China. Amid protests in Hong Kong last year, demonstrators broke into the legislative building on the anniversary, spray-painted slogans on the walls and damaged the electronic voting system.

President Xi Jinping signed a presidential order promulgating the law after its approval by the Standing Committee of the National People’s Congress, the official Xinhua News Agency said. It was to be added to the Basic Law, Hong Kong’s constitution.

Under the law, those found guilty of inciting secessionist or subversive activities and colluding with foreign forces could face life imprisonment if they are deemed masterminds of such activities.

Hong Kong will establish a committee responsible for maintaining national security in the city. It will be chaired by chief executive Carrie Lam and will be accountable to and supervised by the Chinese regime.

Is this law a human rights violation?

Passage of the law came amid fears in Hong Kong and abroad that it would be used to silence opposition voices.

The U.S. has already begun moves to end special trade terms given to Hong Kong after the former British colony was returned to China in 1997.

Speaking in a video message to the U.N. Human Rights Council in Geneva, Lam said the law would “only target an extremely small minority” of lawbreakers, would not be retroactive, and that mainland legal bodies would only have jurisdiction in “rare, specified situations.”

Critics say it is the most significant erosion to date of Hong Kong’s British-style rule of law and the high degree of autonomy that Beijing promised Hong Kong would enjoy at least through 2047 under a “one country, two systems” framework.

Hong Kong pro-democracy activists Joshua Wong, Agnes Chow and Nathan Law issued statements on Facebook saying they would withdraw from their organization Demosisto, which then announced that it would disband with the loss of its top members.

RELATED: Scientists Warn That Another Pandemic Could Be Emerging in China

Wong said “worrying about life and safety” has become a real issue and nobody will be able to predict the repercussions of the law, whether it is being extradited to China or facing long jail terms.

A group of about 30 pro-China supporters gathered at Hong Kong’s Tamar Park on Tuesday, waving Chinese flags. Organizers said that the rally was to show support for the new law and to celebrate Hong Kong’s return to China.

The law’s passage “represents the greatest threat to human rights in the city’s recent history,” according to Joshua Rosenzweig, head of Amnesty International’s China Team.

“The speed and secrecy with which China has pushed through this legislation intensifies the fear that Beijing has calculatingly created a weapon of repression to be used against government critics, including people who are merely expressing their views or protesting peacefully,” Rosenzweig said in a statement.

Concerns were also expressed in Taiwan, which Beijing claims as its own territory to be brought under its control by force if necessary.

“Democracy and freedom are shared universal values of Hong Kong and Taiwan,” the island’s Mainland Affairs Council said, adding that China had betrayed its promises to Hong Kong,

Ahead of the law’s passage, the Trump administration said it will bar defense exports to Hong Kong and will soon require licenses for the sale of items that have both civilian and military uses.

“We cannot risk these items falling into the hands of the People’s Liberation Army, whose primary purpose is to uphold the dictatorship of the [ruling Communist Party] by any means necessary,” Secretary of State Mike Pompeo said in a statement.

British Foreign Secretary Dominic Raab said his government was “deeply concerned” by reports of the law’s passage, saying it would be a “grave step.” Britain has said it could offer residency and possible citizenship to about 3 million of Hong Kong’s 7.5 million people.

“This issue is purely China’s internal affairs, and no foreign country has the right to interfere,” Chinese foreign ministry spokesperson Zhao Lijian said.

He said China would take necessary measures to protect its national interests in response to “the wrong acts of the United States.”

Government critics fear Beijing will use the law to pursue political opponents. Some have questioned the legal basis for the legislation, saying it undermines the Basic Law.

An earlier attempt to pass a security law in 2003 was dropped after hundreds of thousands of people marched in Hong Kong against it.

China for years had put off another such effort. Citing a new urgency after last year’s protests, it announced it would bypass the Hong Kong legislature and enact the law on its own.

Chinese officials have railed against what they call foreign interference in the territory that they blame for encouraging the anti-government protests. Beijing condemned the protests as an attempt to permanently split Hong Kong from China.

Drafting of the law took place amid intense secrecy, with even top Hong Kong officials reportedly not given advance notice of its specifics.

Questions linger over the effects on Hong Kong’s free press that has come under increasing political and financial pressure, as well as the operations of nongovernmental organizations, particularly those with foreign connections.

The law’s passage comes after Hong Kong’s legislature in early June approved a contentious bill making it illegal to insult the Chinese national anthem. Pro-China figures have also been pushing for more “patriotic” education to be introduced into the curriculum in hopes that it will boost their identification with Beijing.