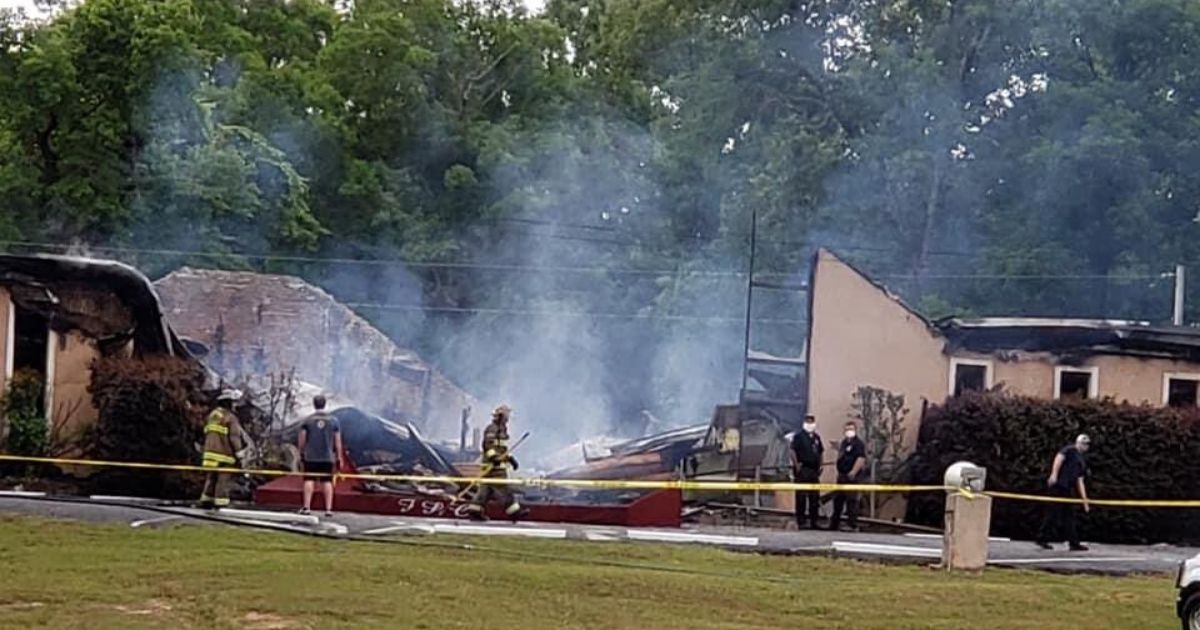 First Pentecostal Church in Holly Springs, Mississippi, which previously defied government orders to close, tragically burned to the ground in what investigators suspect is an act of arson.

Firefighters responded early Wednesday morning, according to WATN-TV, and what they found was a chilling indication of the possible motive in the spray-painted message left at the scene: “Bet you stay at home now you hypokrits.”

Twitter user Rev. Stephen M. Leach shared photos of the scrawled message along with the smoldering remains of the church building.

“First #Pentecostal Church in Holly Springs, Mississippi, refused to close due to #COVID19 restrictions and in retaliation the #Church was set ablaze today,” Leach tweeted. “The Arsonists spray painted these words in the pavement, “BET YOU STAY HOME NOW YOU HYPOKRITS.”

First #Pentecostal Church in Holly Springs, Mississippi, refused to close due to #COVID19 restrictions and in retaliation the #Church was set ablaze today. The Arsonists spray painted these words in the pavement, “BET YOU STAY HOME NOW YOU HYPOKRITS”. pic.twitter.com/FjvrBTt1Qk

Although Mississippi Gov. Tate Reeves has urged churches to cancel services, he did not formally prohibit worship gatherings as other governors have done.

“In America and Mississippi, we’re not going to be the kind of government that shuts down worships,” he said in April, according to WREG-TV.

The city of Holly Springs, however, initially made no such concessions for worship and imposed curfews except for “essential” activities, an order that was later amended to permit drive-thru services, according to WLBT.

Do you think this possible act of arson is an indication of a larger war on religious freedom?

Now it appears as though the congregation paid a high price for standing its ground, but Waldrop is undeterred.

“I’ll get with our faithful people, and maybe rent a building or whatever we need to do for the time being,” he said.

Reeves also expressed his outrage and sadness at the turn of events.

“I am heartbroken and furious,” the GOP governor tweeted Thursday. “In Mississippi, a church was just burned to the ground. They had been trying to open services. There was graffiti on the lot which read ‘Bet you stay home now you hypocrites.’”

“What is this pandemic doing to us? We need prayer for this country,” Reeves said.

I am heartbroken and furious. In Mississippi, a church was just burned to the ground. They had been trying to open services. There was graffiti on the lot which read “Bet you stay home now you hypocrites.”

What is this pandemic doing to us? We need prayer for this country. pic.twitter.com/TdGHqs9evv

No arrests have been made in connection with the fire, although officials are still investigating.

This unspeakable act of violence highlights tensions between government overreach and religious liberty that have erupted throughout the coronavirus pandemic.

America itself seems to be split between one side which eagerly seeks to punish those who don’t fall in with draconian rules and the other side which seeks to resist the frightening proliferation of authoritarian rule.

As city and state governments issued lockdown orders nationwide, many did so on the subjective basis of whether the business or service was “essential” or not.

This has sparked many conflicts, as the orders were often at odds with First Amendment rights, with many prohibiting the freedoms of both religion and assembly.

At the very least, governments ignored the fact that to religious believers, worshiping God is the very definition of an “essential” activity.

While the conflicts have largely been nonviolent, this incident is not the first time a congregation has been hassled by police or faced possible acts of vandalism for standing its ground.

What is unfolding is the ultimate stress test for the United States Constitution, and only time will tell if the ideas laid out on age-worn parchment are strong enough to withstand the modern forces unleashed by fear of a global pandemic.

Until the investigation is complete, it will be impossible to know for sure if First Pentecostal Church was a casualty of the hysterical idea — fueled by government and media alike — that allowing people to leave their house is dangerous and stopping them by any means necessary is the valiant thing to do.

What is certain, however, is that what was once a beloved house of worship is now nothing more than a smoldering pile of ruins.

If Americans aren’t vigilant, religious freedom itself will be next.