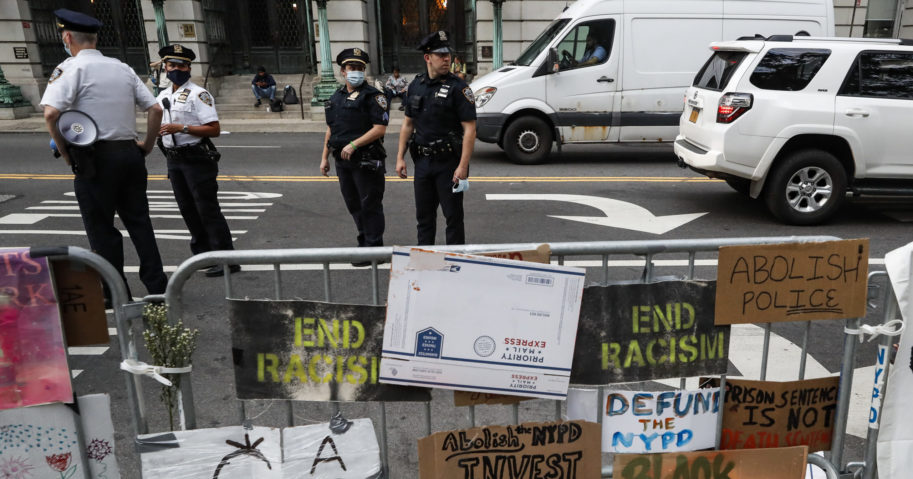 New York City lawmakers are holding a high-stakes debate on the city budget as activists demand a $1 billion cut from the police department.

The City Council was meeting Tuesday with a midnight deadline to pass a budget ahead of the fiscal year that begins Wednesday.

It comes with protesters camped outside City Hall demanding that the city slash $1 billion from the New York Police Department’s budget amid a nationwide campaign to defund police.

New York Mayor Bill de Blasio said Tuesday that he and council leaders had agreed on a $1 billion shift.

The cuts would come from canceling the next police recruiting class of nearly 1,200 new officers, slashing overtime spending, redeploying officers from administrative functions to sustain patrol levels and moving responsibility for school crossing guards and some homeless outreach from police to other city agencies.

Money would go instead to education, social services and summer youth programming.

The bulk of the cuts are being made to the NYPD’s capital budget, including cancelling plans to build a new police precinct in Jamaica, Queens, and instead using the money to build a community center nearby.

The city is also planning to shift some police capital funding to install broadband internet in public housing complexes.

“We’re acting on that call for justice. I believe it is our mission to redistribute resources to those who need them the most,” the Democratic mayor said. “This is real redistribution.”

Activists have said they won’t accept any plan that merely shifts money around without making what they see as meaningful changes.

“No funny math. No budget musical chairs,” relatives of more than a dozen people killed by NYPD officers said in a letter on Tuesday to the mayor and council.

“We’ll know if you fought for our communities or whether you will let the NYPD continue to be treated as if they’re above the law, even in the budget.”

The NYPD budget is now around $6 billion, plus several billion dollars more in shared city expenses such as pensions.

The debate comes as the city is grappling with what de Blasio has pegged at a $9 billion revenue loss.