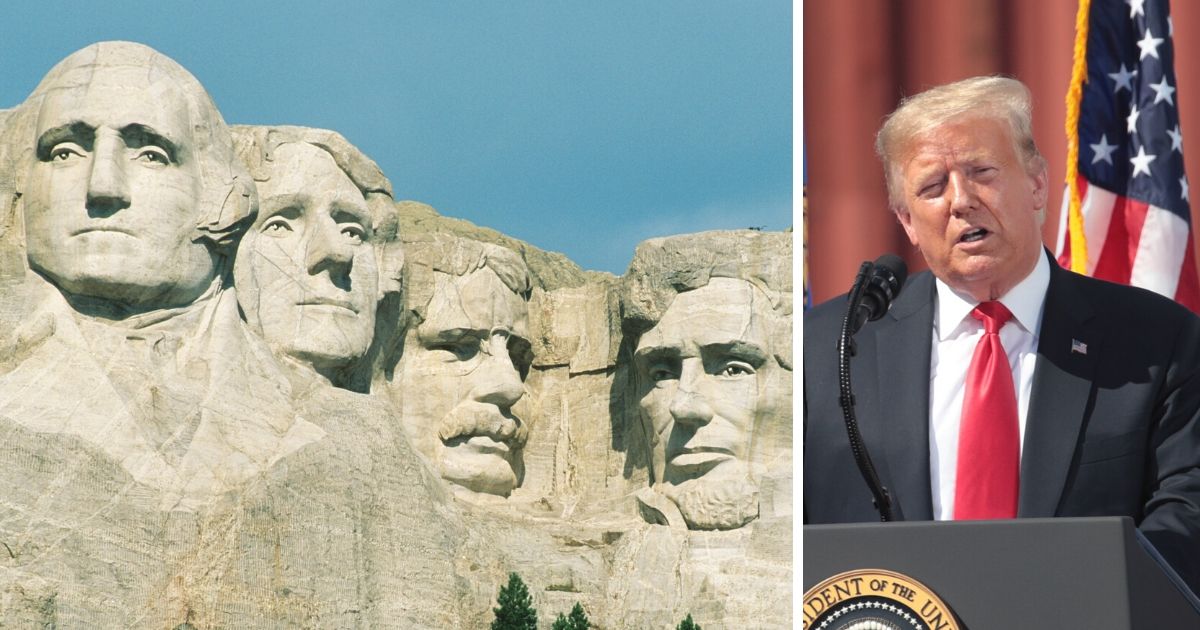 Every once in a while, Democrats let Americans know how they really feel about their country.

And a Twitter post Monday night was one of those occasions, when the official account of the Democratic National Committee published – then deleted – a tweet implicitly deriding Mount Rushmore, a tribute to some of the nation’s greatest heroes, as a triumphalist monument built on lands American Indians held sacred, and an Independence Day celebration as nothing more than a “white supremacy rally.”

It was enough to raise the question of whether Democrats consider themselves “Americans” at all.

The Democrat Party just deleted this tweet attacking Mount Rushmore and referring to a Independence Day rally as a “white supremacist” rally pic.twitter.com/i9kSyqWSq4

Naturally, the Twitter post was directed at President Donald Trump and his plans to celebrate the Independence Day weekend Friday at the South Dakota symbol, which bears the images of Presidents George Washington, Thomas Jefferson, Abraham Lincoln and Theodore Roosevelt.

Those are president who have been honored by every previous generation of their countrymen — but apparently not the Democrats of 2020.

Tellingly, the tweet linked to a story from The Guardian – a leftist newspaper based in the United Kingdom. (Maybe no one at the DNC staff understands that the Fourth of July celebrates the country’s declaration of independence from England?)

Do you think the Democratic Party is disgusted with America?

So, a once-proudly American major political party publicly decries one of the country’s most visible monuments as an insult to “Native communities” and backs it up with a story from a foreign news outlet? No wonder someone at the DNC decided to delete the post – it was too honest about the Democratic Party’s evident disgust with the country it’s trying to lead.

Fortunately, the post was spotted and preserved in a screenshot before Democrats could hide the evidence.

And the blowback was brutal.

This is the new Democrat party led by liberal radicals who hate the United States and Have been rioting in the streets destroying statues hoping Americans forget history. A vote for any Democrat and I mean any Democrat is a vote to Continue this madness. Don’t reward Democrats

No. It’s not white supremacy. Lincoln freed the slaves. These were our founding fathers who fought for religious freedom and freedom from Kings& Queens of England. We have the most free society in the world. That’s why they want to destroy it.

Democrats want to get rid of our history. Shame on them

And this one makes the most important point.

Democrats like House Speaker Nancy Pelosi go to considerable lengths to surround themselves with “American” imagery – flags in the background while she makes her disgraceful speeches, bunting around stages (when she’s not kneeling in kente cloth, anyway) – but when it comes right down to it, sane Americans have every right to wonder if the party even believes in the country at all.

The current madness of the mobs, tearing down statues in a bizarre attempt to purge American history of anything that doesn’t meet the dismal standards of 21st century progressive morality, has given the country a real-time look at how much disgust much of the Democratic base holds for the country.

But sometimes the mask slips, and a post like a deranged statement about Mount Rushmore gets published from the headquarters of the party itself.

To sane Americans, the United States as a country is a blessing to the world. It’s not perfect by any means, but it’s a beacon of hope that draws immigrants by the millions. It’s defeated real fascism in war, it defeated the totalitarianism of the Soviet Union in the Cold War with strength and the productive capacities that are possible to humans living in a free society where laws and property reign supreme.

But for the painfully woke Democrats of today, the United States is a festering cesspool of “hate” and racism, a place where a celebration of the country’s birth is actually a “white supremacy rally” in disguise.

When November comes, voters will have a choice to make between which two visions of the country they love will prevail: One that declares it’s making America great again, and one that evidently wants to destroy it.

The mask slipped on Monday. It’s the job of every American to make sure voters don’t forget it.