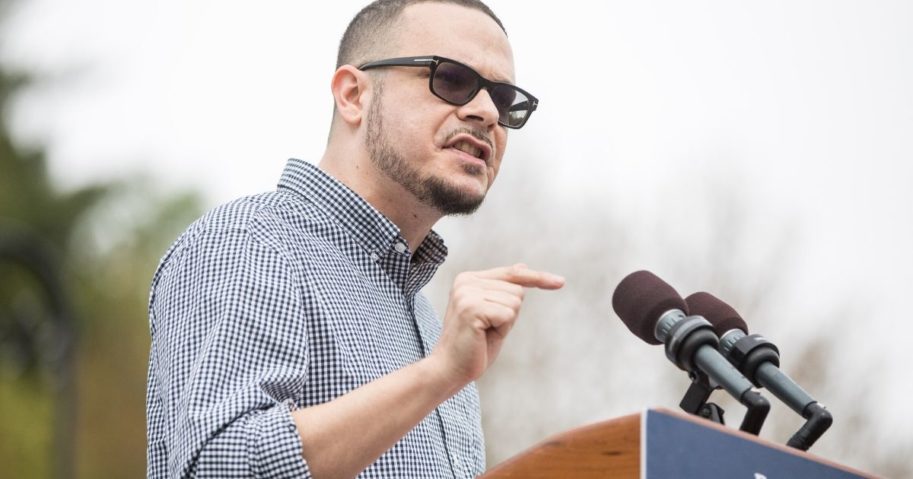 Activist Shaun King introduces Democratic presidential candidate Bernie Sanders during a rally in Montpelier, Vermont, on May 25, 2019. Churches have been targeted in America’s culture wars; King has called for religious art to be destroyed. (Scott Eisen / Getty Images)

A 24-year-old man was arrested after an incident Saturday in which a driver crashed through the doors of an occupied Catholic church in Ocala, Florida, then set the building on fire.

Although people were inside Queen of Peace Catholic Church, no one was injured, according to the Orlando Sentinel.

Ocala is about 80 miles northwest of Orlando.

Steven Shields, 24, was charged with attempted second-degree murder, first-degree arson, burglary with assault, and eluding law enforcement. He was being held without bail.

Shields allegedly drove a van through the church doors and into its foyer at about 7:30 a.m. Saturday and then spread gasoline before starting a fire.

The Sheriff’s Office said security video from the church shows a man carrying large red gasoline cans. After pouring gasoline on the floor, the man slipped and fell. He then lit the fire after throwing a shoe into the foyer, according to the Ocala Star-Banner.

A woman in the foyer at the time told deputies she asked the man if he was all right.

Florida man plowed his vehicle into the Queen of Peace Catholic #Church as it was preparing for morning Mass on Saturday, poured gasoline in the foyer, then set the building on fire before driving off ~
Marion County Sheriff’s Officehttps://t.co/vz7vzRemxv

Should the government do more to protect churches?

How many churches have burned lately…1https://t.co/6MMLbkpYgL

BREAKING: @MCSOFlorida deputies are at Queen of Peace Catholic Church on Southwest Highway 200 right now. A man drove his van into the front doors of the church and then lit a fire while parishioners were inside. https://t.co/1hxvzNNyYJ

The incident came as churches have emerged as a target in America’s culture wars. Activist Shaun King, for example, called for religious art to be destroyed. The Florida incident, coupled with church fires in California, left some people calling for more attention to protecting America’s houses of worship, according to Fox News.

Yes, I think the statues of the white European they claim is Jesus should also come down.

They are a form of white supremacy.

In the Bible, when the family of Jesus wanted to hide, and blend in, guess where they went?

Why’s is the media refusing to acknowledge & condemn the many Catholic Churches vandalized or burned lately?

People were worshipping INSIDE THE CHURCH in Florida yesterday when it was lit on fire!

According to the Star-Banner, Detective John Lightle of the Marion County Sheriff’s Office said Shields admitted setting the fire and reeked of gasoline after police caught him.

Shields called his action “awesome” and smiled and laughed during questioning, according to an arrest affidavit. Lightle said Shields told him he was diagnosed as a schizophrenic but was not taking his medicine.

Shields said he has issues with the Catholic Church and referred during his questioning to passages in the Book of Revelation and other parts of the Bible. Shields also said he was on a “mission” and referred to himself as a “king.”

“We praise God that no one was injured,” the Diocese of Orlando said in a statement. “We join in prayer for Father O’Doherty, the parishioners of Queen of Peace Catholic Church, our first responders and the gentleman who caused this damage.”

The church was not closed by officials, but they did move other Masses into the parish hall.

“Our freedom of worship granted in the Constitution is a freedom that we all hold dear. My deputies and I are sworn to protect that right and will always ensure our citizens can worship in peace,” Sheriff Billy Woods said in a statement.

“I’m proud of my deputies for capturing this man so quickly, and we appreciate the assistance from all of the state and federal agencies that worked alongside of us during this investigation,” he said.