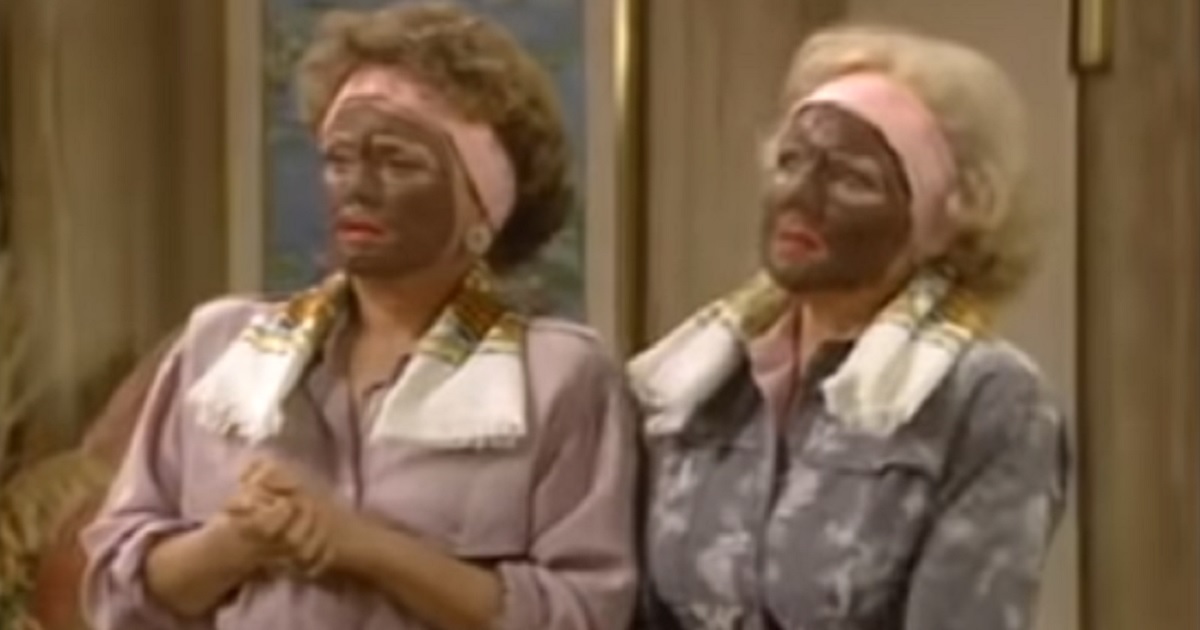 Sometimes when you don’t get the joke, it’s because you are the joke.

Apparently humorless executives at the Hulu streaming service company were finding that out on Monday as word spread about the company’s decision to pull a harmless episode of the 1980s-90s sitcom “The Golden Girls” from its lineup because of an extended joke involving “blackface.”

The joke didn’t involve anyone actually wearing blackface, and it served a way to provide comic relief in an otherwise tense scene involving an interracial engagement between a young white man and an older black woman.

Given that “The Golden Girls” wasn’t known for high tension in the first place – though it would take jabs at social commentary from a typically liberal position – it would take an idiot of rare distinction to drum up offense at the Season 3 episode that features Betty White undergoing a beauty treatment with Rue McLanahan’s Blanche and declaring to a visiting black family:

“This is mud on our faces. We’re not really black.”

It says a lot about the year 2020 when “Golden Girls” wit is too subtle for a company executive petrified that the woke mob might be on the doorstep any minute, pitchforks high and torches aflame.

During the episode, Bea Arthur’s Dorothy finds out her twenty-something son is planning to marry a black woman in her 40s.

When the intended’s own family appears – a mother and two aunts – hilarity doesn’t quite ensue, but it’s funny enough for a “Golden Girls” episode. It even makes points about race and relationships that most Americans could agree with, and certainly jibe with the beliefs progressives claim to hold.

The point here is that the mudpacks worn by White and McClanahan’s characters isn’t supposed to be “blackface.” It’s a joke about blackface.

Anyone with an IQ higher than the drinking age would be able to figure that out. But stark, senseless fear has a way of making anyone do stupid things – and decisions like the one just made by the painfully liberal Hulu show just how petrified certain segments of the American population are right now.

And petrified people do some staggeringly stupid things.

The politically correct mob is truly the most racist. They will look for racism anywhere and they will find it because it’s all they see.

RELATED: Rolling Stone Story Calls for Good Cops To Be Canceled, Says They Do Real-World Damage

What’s really funny, though, is judging by a good percentage of the social media response, even supporters of the Black Lives Matter movement were put off by the Hulu decision.

Apparently, even men and women who think defunding police departments to leave honest Americans at the mercy of criminals is the pinnacle of reason have a breaking point when it comes to accepting the inane.

Just so you know, bl@ck ppl never asked for that lol. They’re doing that so ppl can criticize the BLM movement pic.twitter.com/9uQKZTVEWu

Corporations are like divorced dads buying random stuff to buy their kids love, who they don’t really understand.
“I bought you an X-Station so you can play Mario. Is that what you like? Mario, right?”

They’re DEFINITELY bringing this to the extreme so the general public will get fed up and start complaining when companies do something like this, this way companies don’t have to care about racial issues anymore to be on the public’s side.

And this one says more than it intended to.

Absolutely no one asked for this. Not a single soul. Not one individual on the planet. They’re just trying to undermine the BLM movement and make it look petty.

It didn’t take a dumb decision by Hulu executives to make the BLM movement look “petty.”

Black Lives Matter activists, with their sham “uncompromising idealism” that’s simply thuggishness in action have taken care of that.

And when idiotic calls to “defund police” to protect blacks from violence result in zones where a black man can be shot and killed because law enforcement can’t get to him, any American who’s paying attention can see the problem.

What it comes down to is there are outlets for any American to “petition the government for redress of grievances,” and in the case of black Americans, the mainstream media has been exquisitely attuned to allegations of police violence against blacks since the “hands up, don’t shoot” lies grew up in Ferguson, Missouri, back in 2014.

Do you think Hulu should return this episode to availablity?

The fact that American corporations are currently terrified of being the next target of the fascistic cancel culture means there are likely to be more decisions like the ones Hulu just made about the “Golden Girls” – by spineless university administrators, by opportunistic Democratic politicians, by insecure executives in the entertainment world.

Much of the sane part of America came to the correct conclusion about the Black Lives Matter movement’s rapacious pettiness a long time ago – and that number is only likely to grow in the months heading into November, as more and more foolishness like this becomes part of the cultural landscape.

Since the events in Minneapolis in May, liberal politicians and the mainstream media outlets that support them have been more or less openly optimistic that the unrest will lead to the defeat of President Donald Trump in November.

If idiocy like this pulled “Golden Girls” episode continues – and it almost certainly will – it’s a good chance they’re going to find out the joke really is on them.