Pelosi: Trump Won’t Be President Next Year ‘One Way or Another

Democratic House Speaker Nancy Pelosi has declared that Democrats will remove President Donald Trump from the White House this year “one way or another.

“Speaking Sunday during an interview with ABC News, Pelosi claimed that Democrats may “have him removed sooner” than the upcoming general election.”Let’s be optimistic about the future,” Speaker Pelosi stated.”A future that will not have Donald Trump in the White House, one way or another.

“Ten months from now, we will have an election, if we don’t have him removed sooner.”But again, he will be impeached forever,” Pelosi concluded. 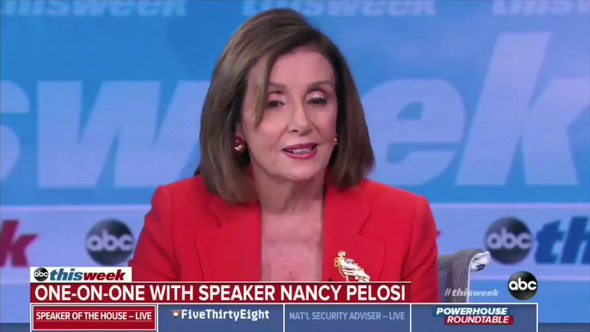 Rep. Steve Scalise (R-LA) posted a clip of the interview on Twitter, blasting Pelosi’s remarks.Scalise denounced the impeachment push against the president as “a Democrat hit job to stain Trump’s legacy and hurt him at the polls.”

Rep. Mark Meadows (R-NC) also responded to the comments, specifically the line that “Trump will be an impeached President forever.”Impeachment is “all about trying to politically damage the President,” Meadows said on Twitter.

The full House voted last month, almost completely along party lines, to impeach Donald Trump for abuse of power and obstruction of Congress.Instead of then voting to send the two articles to the Senate, Democrats held them hostage in the House.Senate Majority Leader Mitch McConnell (R-KY) has made it clear he intends to hold a speedy trial, likely without calling additional witnesses.The Kentucky Republican has said privately that he plans to work around the clock until the impeachment trial is over.This would not only hold the 100 Senators on Capitol Hill throughout the trial but could also take four presidential candidates off the campaign trail.Senators Bernie Sanders of Vermont, Elizabeth Warren of Massachusetts, Cory Booker of New Jersey and Amy Klobuchar of Minnesota are all actively campaigning to become the Democratic nominee for president in 2020.