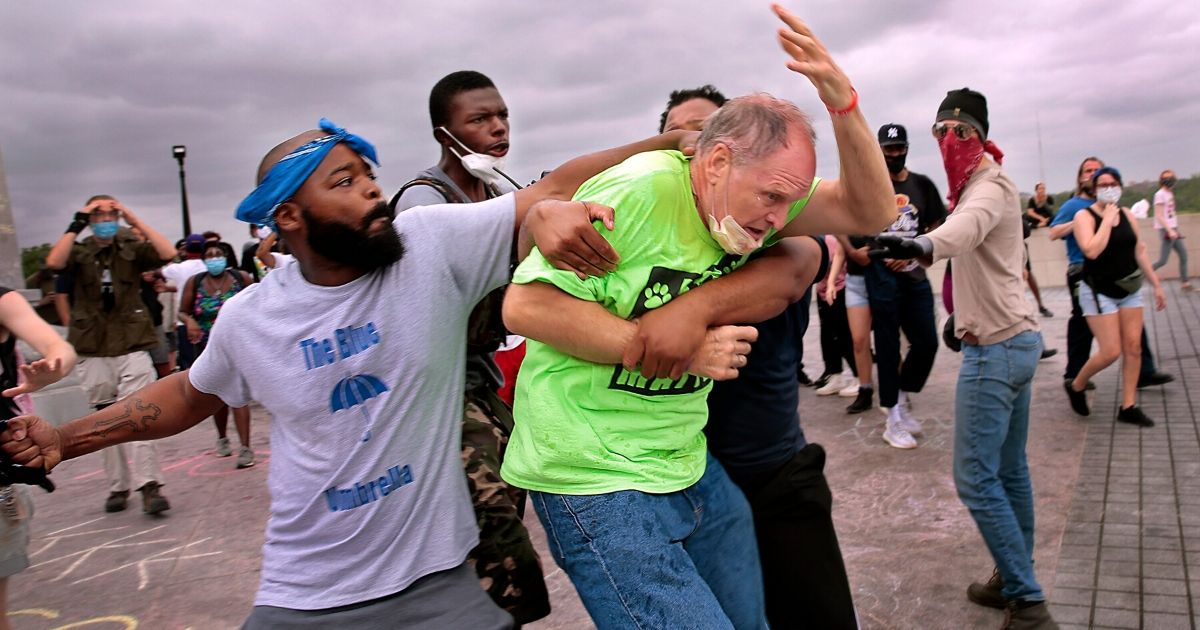 Catholics in the city of St. Louis prayed and defended a statue of King Louis IX that sits atop Art Hill in the city’s Forest Park on Saturday. King Louis IX is a canonized saint in the Catholic church.

As the Catholic News Agency reported, “St. Louis was King of France from 1226-70, and he partook in the Seventh and Eighth Crusades. He restricted usury and established hospitals, and personally cared for the poor and for lepers. He was canonized in 1297.”

The statue, also called the “Apotheosis of St. Louis,” was unveiled in 1906. It is a copy of one that greeted visitors to the World’s Fair in 1904.

During the protests Saturday, Black Lives Matter and other leftist activists viciously attacked some of the Catholics who were praying the rosary, including an elderly Catholic man.

Should he stay or should he go? Protesters clash over statue of St. Louis’ namesake, by @joelcurrier. https://t.co/bjKfqV94mb pic.twitter.com/WnghoNF0rM

One of the Catholic protesters, Conor Martin, detailed on Twitter what happened during the attack.

“They took his walking stick from him and when he didn’t react they knocked his hat off of his head, called him a skin head, and attacked him,” Martin wrote. “At this point I intervened to pull the attacker off of my friend, and I was attacked by the mob and the attacker.”

WARNING: The following video contains disturbing violence and vulgar language that some viewers may find offensive.

Martin said he will be pressing charges and has asked for help identifying the assailants.

“This can not stand,” he said. “The police were called 6 times by others on the sidelines and never showed up.”

The Rev. Stephen Schumacher, a Catholic priest with the Archdiocese of St. Louis, stood on the base of the statue and attempted to offer a history lesson on King Louis IX.  Activists shouted him down.

The Rev. Stephen Schumacher, a priest with the St. Louis Archdiocese is attempting to provide a history lesson on King Louis IX. He’s being shouted down. pic.twitter.com/lMP1aHhEUO

“St. Louis was a man who willed to use his kingship to do good for his people,” Schumacher said.

For Catholics in Missouri, the importance of this moment is deeper than St. Louis himself.

“I think he symbolizes deep faith and convictions. I stand for him. And I stand for those Catholic virtues and those Catholic values that I think are important, like courage, faith and love. But ultimately, I’m here for Christ the king,” Maria Miloscia, 25, of Jefferson County told the St. Louis Post-Dispatch.

Catholics continued to pray throughout the day, even after the attacks.

This is what happens when you pray the rosary in St. Louis. @gatewaypundit @CassandraRules @michellemalkin pic.twitter.com/yIAOntxMoR

They later cleaned off profanity that activists had written on the statue’s base.

It is remarkable how quickly left-wingers will judge figures from hundreds of years ago while refusing to look at their own crimes. They endorse everything from the mass genocide of abortion to infanticide and euthanasia.

Yet they are looking back 800 years to judge King Louis, a man who reformed a medieval European justice system into one that is not too far from our modern version.

As Catholic writer Anthony Esolen has noted, “The progressive has turned original sin, which afflicts all mankind, into political error, which conveniently afflicts his opponents and not himself.”

Should the Louis IX statue be taken down?

Leftists are merciless in looking back over time and judging the sins of historical figures. At the same time, they come down hard on Christians who acknowledge the reality of sin and the human need for redemption.

Humans beings have the right to celebrate supposedly flawed historical figures and turn to God during a testing time.

Of course, leftist protesters have attacked more saints than King Louis IX lately. They recently tore down statues of missionary St. Junipero Serra in San Francisco and Los Angeles. Catholic students and a priest were able to stop rioters from tearing down a St. Junipero Serra statue in Ventura, California.

BLM extremists and other radicals are practically turning into a terrorist arm of the Democratic Party, with Democratic mayors allowing them to run wild in the streets and Democratic governors making excuses for them.

Catholics know too well what happens when a terrorist arm of the Democratic Party is allowed to run wild against Catholic sites: The Ku Klux Klan had a long and brutal history of targeting Catholics. In the 19th and early 20th centuries, Klansmen even attacked Catholic universities, including Notre Dame.

Few Americans know this history even as it feels as if history is repeating itself. Yet supposed Catholics in the Democratic Party such as House Speaker Nancy Pelosi and presidential nominee Joe Biden refuse to boldly condemn the “peaceful protesters.”

The Catholics in St. Louis should be an inspiration to all Americans, of any faith or none. They are defending their history and heritage and refusing to back down against the mob.