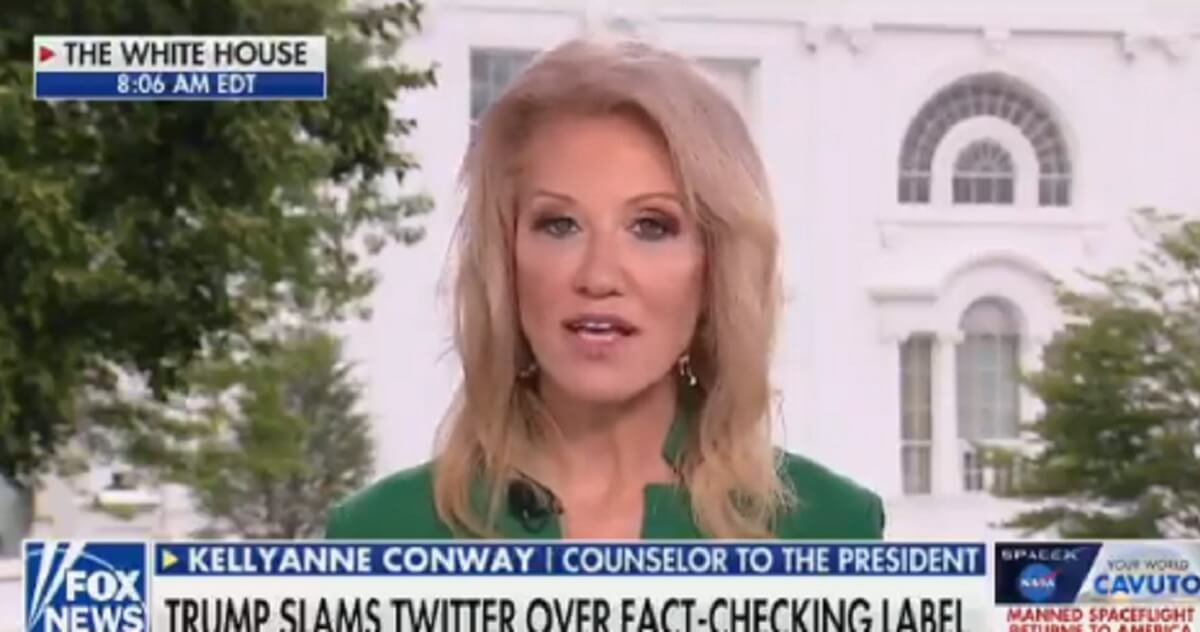 After years in the limelight as one of President Donald Trump’s most articulate defenders, Kellyanne Conway knows how biased the media can be.

So Tuesday’s move by the social media giant Twitter to “fact check” Trump’s influential postings couldn’t come as much of a surprise, and Conway had an answer for it on “Fox & Friends” on Wednesday.

And she didn’t hold back.

Counselor to the President @KellyannePolls on Big Tech Censorship: They are now relying on people who attack @realDonaldTrump everyday to fact check him pic.twitter.com/MrayndSrKo

The conversation kicked off with co-host Brian Kilmeade pointing out that Twitter was using stalwart anti-Trump news outlets like CNN and The Washington Post to “fact check” a president the whole country knows they loathe.

“That part is the richest of all. These people have gotten nothing right over the last three years, beginning with the very election,” Conway said.

“So many conservatives feel like they don’t have a voice in the mainstream media. You’ve seen the statistics, they’re unignorable. Fact check: Over 90 percent of mainstream media reportedly vote for the Democratic presidential candidate, so many conservatives and many non-liberals, many non-voters feel like they have a platform on social media that allows them, for free, to express themselves.

Conway then went on to call out a specific individual:

Yoel Roth, the “head of integrity” at Twitter, is himself a political operative, she said, with a history of targeting the president, the president’s backers among voters and Senate Leader Mitch McConnell.

Lashing out at Twitter for fact checking Trump’s inaccurate tweets, Kellyanne Conway directs supporters to go after a Twitter employee: “Somebody in San Francisco will wake him up and tell him he’s about to get more followers.” pic.twitter.com/J7sVzeyw5H

“This guy is constantly attacking Trump voters, Trump, Mitch McConnell, you name it. And he’s the head of integrity at Twitter,” Conway said. “Go and read what he said. ‘We fly over, you know, the racist flyover country, who voted for Trump.’

“It’s just horrible the way he looks at people who otherwise should have a free and clear platform on Twitter.”

A Fox News report Tuesday night – posted only hours after the social media giant attached indicators to two of Trump’s tweets claiming that his statements about the potential for mail-in voting fraud were misleading – contained details about the social media history of Yoel Roth, Twitter’s “head of integrity.”

Among the examples Fox cited were a Roth Twitter post from Election Day 2016 that belittled states that voted for Trump, a post from 2017 referring to the Trump administration as “ACTUAL NAZIS IN THE WHITE HOUSE,”AND OTHER  another from the same year calling McConnell a “personality-free bag of farts.”

“How does a personality-free bag of farts like Mitch McConnell actually win elections?” Roth wrote.

Actually, a better question might be how an apparent 10th-grader’s level of political discourse qualifies anyone to be the “Head of Integrity” for a social media platform with hundreds of millions of users.

The reality is that appending articles from CNN and The Washington Post to a Trump Twitter feed – or The New York Times or The Associated Press – is the functional equivalent of appending a news release from the Democratic National Committee.

As the election nears, American voters can expect to see more of this kind of unbelievable pressure mounting against Trump’s re-election bid.

There will be more dishonesty from the ludicrously dishonest mainstream media, more preening preaching from the glitterati of Hollywood, more social media scolding from liberals thirsting for a Trump humiliation in the fall.

Conway called it on the nose, as she often does. The anti-Trump #Resistance has long since moved from opposition to Trump to opposition to the democracy that elected him to the presidency under the rules of the Republic — the Electoral College.

They’ve gotten nothing right in the past three years. It’s up to the voters to make sure they’re wrong in November – again.