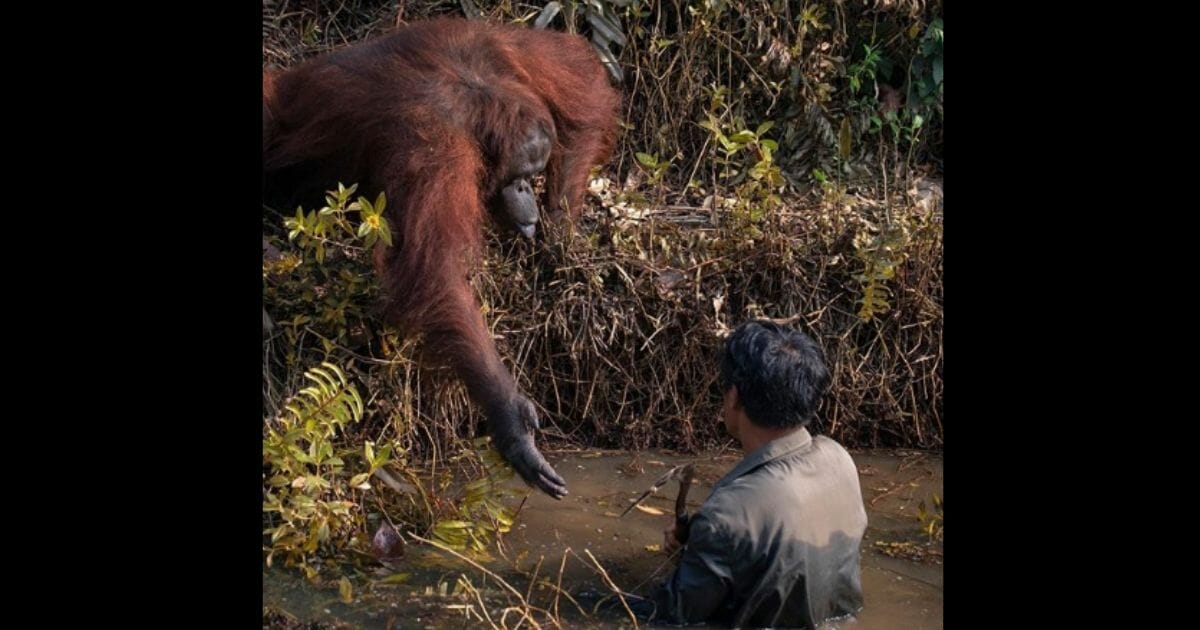 A man on a safari witnessed a once-in-a-lifetime moment when an endangered orangutan extended a helping hand to a park ranger in snake-infested waters.

Anil Prabhakar, an amateur photographer and geologist from Kerala in India, was on the island of Borneo in Southeast Asia when he snapped an awe-inspiring photo.

Prabhakar told CNN he was on a safari with friends in a conservation forest managed by the Borneo Orangutan Survival Foundation when he saw the incredible wildlife encounter.

As Prabhakar observed a park ranger who was in the water to rid the area of snakes, a critically endangered ape appeared at the river bank and extended its hand down to the ranger.

“There was a report of snakes in that area so the warden came over and he’s clearing snakes,” Prabhakar said. “I saw an orangutan come very close to him and just offer him his hand.”

The thick, murky water made it difficult for the warden to move. Prabhakar felt that if the orangutan could talk, it would have said, “May I help you?”

In the midst of the breathtaking moment, Prabhakar managed to snap a photo before the opportunity was gone.

“I really wasn’t able to click,” he said. “I never expected something like that. I just grabbed that moment. It was really emotional.”

An orangutan at a conservation forest in Indonesia was photographed stretching out its hand to a warden, in a photo that has gone viral worldwide. https://t.co/CKQjhYy9Sa

Prabhakar learned that venomous snakes pose a dangerous threat to an already vulnerable species, which is why the park ranger had been in the water trying to clear the snakes.

“”You could say snakes are their biggest enemy,” Prabhakar said.

Borneo’s orangutans also have to compete with forest fires, loss of habitat and hunting just to survive.

Prabhakar said the warden quickly climbed out of the water and got away from the ape.

“They’re completely wild,” Prabhakar said the warden explained to him. “We don’t know how they’ll react.”

“I’m so happy that moment happened to me,” he said.