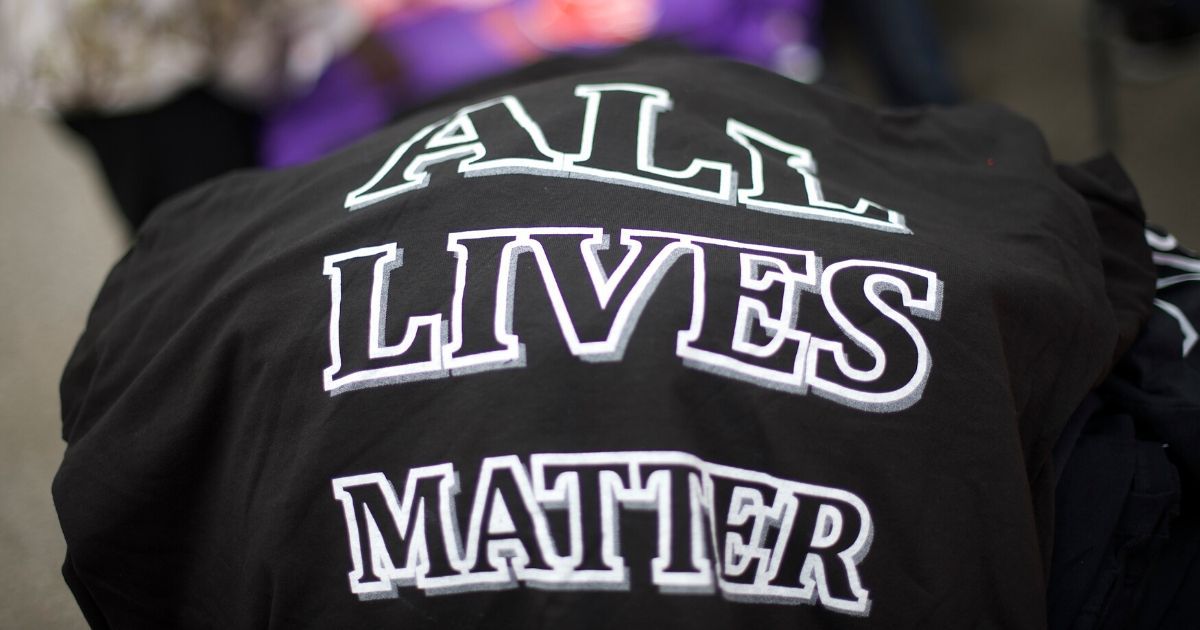 There are three words that companies can no longer imprint, emboss or otherwise communicate when selling products on Walmart.com, the retail giant announced Tuesday.

Those words are “all lives matter.”

In a statement reproduced by WTVD-TV, Walmart said it has no real objection to the concept, it’s just when it comes to printing the phrase on T-shirts, mugs and other items that the company gets squeamish. Walmart had been taking heat from some consumers over the array of items that bore the phrase.

Hey, @Walmart @WalmartCanada can you explain why you’re selling “All Lives Matter” and “Blue Lives Matter” shirts on your website? Who approved this?

“Like other major online retailers, we operate a marketplace that allows third-party sellers to sell merchandise to customers on our website. Recently, some associates and customers have raised concerns about ‘All Lives Matter’ products,” the statement read.

The statement claimed that in an age of widespread protests over perceived racial injustice, words can no longer be taken to mean what they say.

“We fundamentally believe all lives do matter and every individual deserves respect. However, as we listened, we came to understand that the way some, but not all, people are using the phrase ‘All Lives Matter’ in the current environment intentionally minimized the focus on the painful reality of racial inequity,” the statement read.

According to the statement, Walmart is acting to fight racial injustice.

Do you think Walmart’s statement is a blatant example of corporate pandering to the woke mob?

“As a result, we have chosen to remove ‘All Lives Matter’ items from our third-party Marketplace indefinitely. The lives being impacted by ongoing racial injustice are the lives of Black people and people of color, and that’s why we are placing an emphasis there,” the statement read.

The company added that variations on the theme are also a concern.

“We are also increasing our scrutiny of various ‘Lives Matter’ products on our marketplace to ensure compliance with our terms and conditions,” the company said.

USA Today reported that Walmart has also banned the current version of the Mississippi state flag, which includes a representation of the Confederate battle flag.

Not all protests against wearing apparel considered offensive to certain racial or ethnic groups are successful, however.

The Ancient Order of Hibernians is battling Amazon and Walmart over the sale of an “Irish Livers Matter” T-shirt that mock the Irish for the stereotype of the drunken Irishman, according to The Irish Echo.

A search for “Irish Livers Matter” on Amazon yields several pages of results that feature clothing, hats, and baby onesies with the phrase. https://t.co/DiNhkcXvsW

“Amazon continues to hypocritically talk about embracing respect for all heritages and diversity while peddling prejudice for profit. Currently on Amazon there are 142 Items for sale with the phrase ‘Irish Livers Matter.’ One of the items is even labeled ‘Amazon’s Choice,’” the fraternal organization said in a statement.

“This is in addition to numerous items emblazoned with ‘Irish Lives Matter,’ but certainly ‘Irish Livers Matter’ plumbs new depths of defamation. There is no uninformed or misguided positive spin or nuanced interpretation one can put on ‘Irish Livers Matter;’ it insults two heritages for one low price.”

“The hypocrisy of Mr. Bezos’ publicly virtue signaling on Amazon’s policy of respect and diversity while continually peddling prejudice for profit is cynically hypocritical,” the group said.